“Abh ki bar Modi Sarkar “ was the slogan across the youth in the country. And now its “Modi Sarkar” at Delhi.

It feels like something is achieved , ( though its more a illusion ) when I watch news channels which talk about Modi sarkar every now and then , they have a reason to do so , guess what ?? , yes TRPs they know that Modi is public figure and very one wants to see him and hear him. 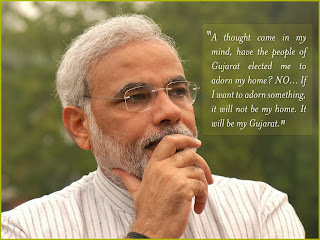 But what actually the youth want from NaMo ? Off-course the most prominent ones are Jobs, Good quality Higher Education, Corruption free environment.

Youth believed in Namo because he had his Gujarat Model to showcase. And now he is into Power at 7RCR.

But is it the end of the story ??? Definitely a big nooo... !! Well we all said “Abh ki bar Modi Sarkar” and we voted too, to put NaMo into power so that he can take his Gujarat model to Country wide model. And now its time to say “Ab kare yogdaan Desh keliye isbar Modi Sarkar ke Sath”.

We youth can't leave everything up to to Modi , don't forget that we are a nation with huge population. It's a daunting task to govern such a huge democracy which is struggling with internal and external issues, Modi alone can't do that. He needs our support. We can support him by being good citizen and a responsible youth.

Its sad that youth of India is more active on Social networking sites commenting on various issues and topics but does nothing to society. Criticizing and advising solutions is far easy , that too on social networking sites but to put your words into actions in real world is altogether a different thing.

Its not the Governments which develop the nation , its the people, their attitude , their thinking , their perceptions , their vision , their actions make the nation prosper. India being a powerhouse with huge potential young workforce , its young brigade can change the country's future only if they decide to do so and come into action to do so !!!

Governments let people realize their goals by providing services abiding to the constitutional framework, protecting people by law enforcement. If a Govt does not provide proper services then people don't get opportunities and the country suffers due to lac of growth. Such Governments are shown their way and recent election is an good example of that.

Lets hope that we wont be the same youth which criticizes the govt for doing nothing and does nothing but a vigilant and vibrant youth which has decided to change the country's future and jumped into action to unleash its hidden potential !!!!!.

Jai Hind !!!
P.S.R Patnaik.
This is my first non technical article , so pardon me for errors though you can debug them and let me know :)